Corset Training, How To Make a Corset | 15 comments

Mr Pearl, corsetier to the stars

“My work is not about being fashionable. I do not follow fashion at all. I’m interested in an ideal, a kind of expression of elegance, which really has nothing to do with fashion.”

The infamous Mr Pearl has an 18-inch corseted waist and wears his corset 24 hours a day, 7 days a week except to bath. But his work as a ‘Corsetier’ or maker of corsets is what really skyrocketed him to fame and glory.

Mr Pearl is arguably the most amazing Corsetier in existence, his works of art can take several months each to construct. He has made corsets for designers such as Jean Paul Gaultier, Thierry Mugler, John Galliano, Chloe, Alexander McQueen, Antonio Berardi and Christian Lacroix. And for famous ladies like Kylie Minogue, Dita Von Tease and Jerry Hall.

The infamous Mr Pearl is the alter ego of Mark Pullin, he started tight-lacing at age 30, after seeing a photograph of Fakir Musafar:

Mark Pullin was born in South Africa, he was the eldest son of an English toolmaker, Neil, and a half-English, half-Dutch mother, Yvette. He has a brother , Grant, a motorcycle mechanic. His parents split up when he was three, when he moved in with his grandparents Hetty and Ruben Searle.

“My grandmother wore corsets so I became fascinated by them,” he said. “They were always salmon-pink. She used to let me lace her up. It took a long time as there were lots of eyelets and laces, but it was a great treat.”

Pressure to conform led to a 2 year marriage to a South African actress, after which he moved to London, creating his alter-ego Mr Pearl and setting up shop as a corsetier in 1994. He moved to Paris in 2002 where he now works in the romantic setting behind Notre Dame Cathedral, designing unique pieces for couture houses. He refuses to use any form of modern technology, and their are few photos of him or his work – outside of catwalk and fashion shoots that is. 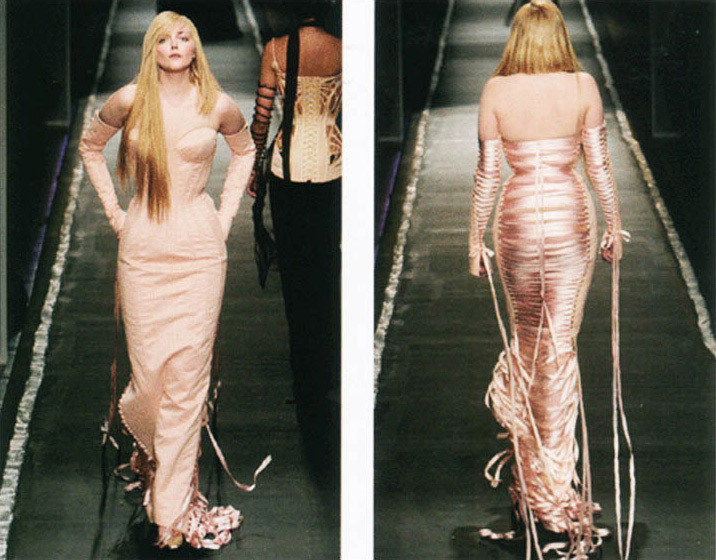 “Corsetry is the deepest, most intimate, most enhancing possibility physically and I’m fascinated by this. Corsetry presents endless, almost unobtainable, possibilities, it could always be tighter, more beautiful, longer in the front. The limit is physical – outward appearances are endless.”

And Finally, Dita Von Tease in one of her personal Mr Pearl corsets (and I think we all agree she’s a lucky lucky girl):