Sorry if you’re having trouble with a download, it doesn’t happen often but possibly it’s a problem with the download link so email me and I’ll send you a fresh one. Or possibly if you’re trying to download to an iPad the files are too big, the course needs to be downloaded to a computer first and then put on via iTunes. If it’s still not working let me know what exactly is happening and we’ll sort something out, sometimes it’s a slow internet connection and people have used work or a friend’s internet and it’s downloaded fine, but let me know.

I’m Having Trouble Scaling Patterns From The ‘Corset Pattern Compendium’?

No problem, it can be a bit daunting to scale up patterns if you haven’t done it before from a book, but it’s very straight forward. The ones in the pattern compendium have to be scaled up like in a traditional sewing pattern book; the patterns are on a grid, so you can scale them up easily using graph paper or squared pattern paper. There is a link to a video showing the process here –

I’m Having Trouble Altering The ‘Corset Pattern Compendium’ Patterns To Fit Me. How Do I Make Them My Size Easily?

The patterns are all based around the UK size 12 woman or US 10 but with a corseted waist obviously. I followed the example of other corset sewing pattern books in making the Pattern Compendium (where a set of patterns are given in an average size, then the seamstress using the book will scale them up and alter the measurements to fit their own). It’s the traditional method for recording patterns in books and in corsetry the waist size is the main concern for fitting a corset, you should then make a mock-up to assess fit elsewhere. Admittedly it is quite old school which is why I then later started my printable patterns range.

It’s all covered in the Compendium; the patterns that are in the course come with instructions on how to alter them to your size using the ‘slash and spread’ method once you’ve scaled them up.

But the best thing to do, if all the cutting and altering the pattern pieces at bust, waist, and hips are hurting your brain, (easily done!) is just to make sure the waist is right, (4inches smaller than your natural waist) then alter the mock up on your body as per the bonus video.  Some people go smaller at the waist but that’s personal preference and they tend to have been wearing corsets a while and know how they like them. All fine-tuning is done using the mockup and there’s a video showing mockup alteration in the bonus video section. If you don’t get on with the course for any reason, there’s also a full money back guarantee so if it doesn’t suit you or it’s all too much I’ll happily refund you no problem 🙂

What’s New In The New Version Of The Express Corset Making Course?

Lots has changed, my method has changed so the video has been completely redone in high quality; it’s now 2 hours long and there’s also a 30 minute bonus video on making professional level back panels and altering mockups. There is also a new pattern – the one on the course cover, and a lot of new material in the Corset Making Manual i.e. a flossing guide, quilting and embroidery instructions, and stencils etc.

What thickness boning? How Many Do I Need?

I use 7mm boning, that’s pretty standard, and what I always suggest for buying bones is that you measure the bone channels on your mockup or corset pattern so you know how many and how long you need them. You want them at least half inch shorter than the pattern pieces so you can bind the top and bottom edge without them interfering/being too long.

Why Are There No Grain Lines On Your Printable Patterns?

Grain lines for all corsets always run 90 degrees from the waist line, so that the direction of least stretch is around the waist. That’s the standard for corsets as you want them to stretch least around the body. Obviously you can adjust the pattern pieces slightly to get the most out of your fabric or to look nicer with the fabric pattern etc. I’ve considered putting them on the pattern pieces but often the pattern pieces, small as they are, would get quite confusing if I tried to squeeze any more information onto them so I chose to leave them off all my patterns, rather than omitting them from the more detailed ones and thus causing confusion.

I’ve Noticed A Lot Of  People, When They Make Their Mockups, Tend To Use Either A Removable Lacing Panel Or An Eyelet Strip?

I use lacing tape at the back, which you can get from several of the online suppliers mentioned in my course & pattern booklets.

Basically a meter is all you’ll ever need. Cut it in half and sew it on to the back of your mockup (fold the edge of the back pieces in, so when you attach the eyelets they come out to where the edge of the back pattern pieces would have, otherwise you’re adding about an inch to the width of your corset). You’ll need two sprung steel bones, one to push in on each side. Then when you make your next mockup, you just rip them off the old one and sew them onto the new one. This is nice and easy if you use a big stitch width to sew it on (so basically a tacking/basting stitch). For the front, just sew it together as if you were making a closed-fronted corset. For the back though, you definitely need the lacing and the two steels, otherwise you can’t check the fit properly. I have seen some makers create eyelet ‘panels’ but these are basically the same as the lacing tape, just their own version – so a mini panel the width of two sprung steel bones with eyelets set down the middle. I’ve also seen the same sort of thing created for the front – a busk that has been sewn into thin strips of fabric, (the way you would anyway with the front panels of a corset) that then gets basted into the front of mockups and removed again for use on the next mockup.

If you’re about to start making your mockup, I suggest ordering a meter of lacing tape and a couple of steels now, then you can make the mockup while you’re waiting for them to turn up.

It can be a bit fiddly that one!

Printer settings would be the first big potential issue to check as they like to ‘fit to page’, which can alter the sizes of your pattern pieces. Make sure they print at ‘100%’.

Here is a picture showing the pieces in the right order so you can see where they go; it’s always a bit tricky with gores. 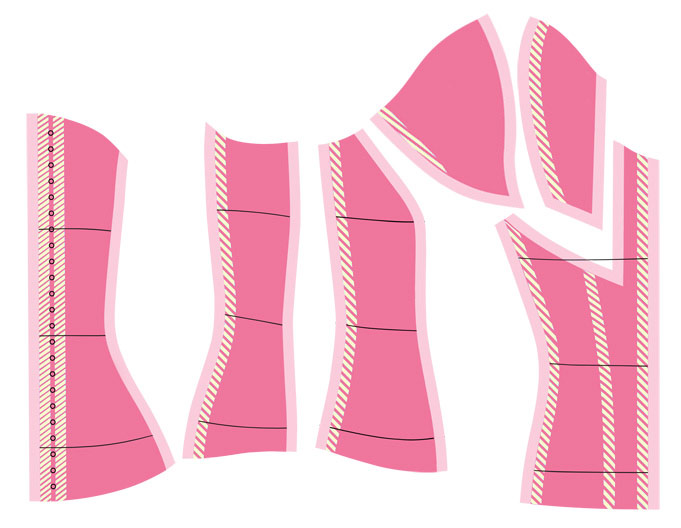 Tip for sewing the seam around the gore –
When you insert the bust gore/cup, a really easy method (and the one traditionally used) is to topstitch the seam; below is an illustration of a topstitched bust gore –

You lay the cup part down, right side up, then take the front 2 panels (that you’ve sewn together in the steps above) that the cup attaches to, also right side up, and fold under their seam allowance where the bust gore goes (you’ll need to clip the seam allowance in places to make it lay flat, especially at the point). I recommend giving it an iron so it stays nice and flat and is easier to sew. Then lay it over the cup along the seam line, pin and top stitch it – i.e. just stitch the layers together from the top, going through all the layers a tiny bit in from the folded edge of the seam. You can sew a second line of stitching a little further away from the seam edge as in the attached picture but this was done historically on single layer corsets to neaten the inside, if you’re making a lined corset it’s not an issue.

No problem! I’ll refund you no questions asked, just email me your purchase details, corsettraining ‘at’ gmail.com, sorry the course wasn’t for you x

Can You Make Me A Custom Corset?

I’m afraid I don’t do custom orders. Feel free to send any of my patterns to another corset maker to make up for you. There’s actually a great resource on Lucy’s website (Lucy’s Corsetry) showing all the corset makers she’s found globally. Potentially you could find one near you so you can go in for a fitting, much better than sending your measurements over the internet – http://lucycorsetry.com/research-corset-brands/corsetiere-map/ Hope that helps!

If I have Questions Or Need Help Can I Ask You? Will You Help?

Of course 🙂 fire away 😀 my email is corsettraining ‘at’ gmail.com. Also, joining the Facebook group is a great idea as you then get lots of corset makers answering your questions, not just me. Many brains are better than one and it’s inspiring to see what others are making – Facebook.com/Groups/CorsetMaking